In January 2017 Madeline visited the sanctuary. You can read all about her experience below.

This is a wonderful animal sanctuary started 4 years ago by Sally Kadoui, an English/Moroccan lady who sold all her worldly goods to travel back to her native Tangier to help animals.

Morocco is a poor country and animal welfare can often be low down on people’s priorities. From a humble beginnings the sanctuary has grown to now accommodate hundreds and hundreds of cats, dogs and donkeys plus a few mules, sheep, macaque monkeys and storks amongst many others! All the animals have a name and their personalities are understood and adored. Sally is helped by her 2 staff members, Moustapha and Kaoultar, who work very hard for small wages. I was so impressed by their love and dedication to their animal family. 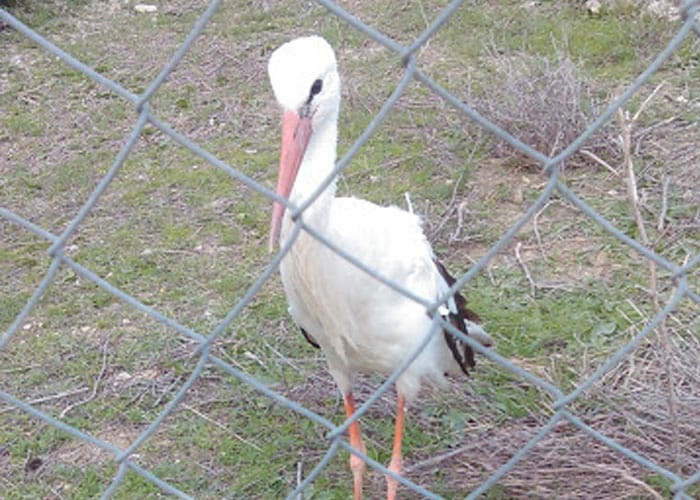 Above is a film of one of the macaque monkeys in their care. Macaques are native to Morocco and are found in abundance in the mountains. Many, like this one, are captured and kept to entertain tourists. This lady had been tied up in a cafe all her life before she was rescued by SFT. She was assessed by a monkey expert who unsurprisingly said she would not survive if released in to the wild. So she will now live out the rest of her life at the sanctuary.

Sally is also taking her work into the local community. Formerly, lack of knowledge or money may have meant the locals would ignore the suffering of an animal but now they know they can come to Sally for help when they see an animal in distress. Sally always appreciates this and makes lots of time for people who come to her for help as she sees this as a growing respect and love for animals.

Sally’s help was requested to help this poor donkey who had been found with a terrible head injury. The vet confirmed the injury was man-made. The donkey was taken in the back of the car (yes very difficult getting her in and out) and expensive treatment was given to help her recover.

A good example of this community work happened on my first day at the sanctuary. A local man came to ask for help with his goat who had been in labour for 48 hours.

Despite Sally having had no experience of matters like these, she rose to the challenge and set off to help. I was allowed to accompany her on this trip.

We drove to the man’s house so it was interesting to see first hand how the local people lived. There were chickens running around, a dog tied to a tree and a barn made of stone where the goats lived. Sally and I tried to be midwife to the goat who had been in the 48 hour labour but even with our limited knowledge it was obvious she was not dilated enough and wasn’t having contractions. So, with no hesitations, Sally organised a vet to see to her even though it was an evening at the weekend, and we drove there with the goat in the back of the car.

The goat, who we named Dorothy, was given a Caesarian section with only a local anaesthetic as general anaesthetics can kill goats. I held her head throughout the operation. Sadly, the baby kid was dead but we expected that might be the case under such traumatic circumstances. Dorothy came back to the sanctuary for a few days for a follow up course of antibiotic injections.

Her owner was very happy and appreciative and asked how he could repay us. Sally said to him that the best repayment would be if he promised not to slaughter Dorothy and to not tie up his dog any more. He readily agreed to these conditions and Sally gave him advice on how to stop the dog chasing his chickens. A few days later Sally also took the dog for vaccinations and neutering – all in all a story with a very happy ending!

Dorothy the goat during her Caesarian Section operation. I had to hold her head as the operating table was too small to hold her.

Abdel Malik, the owner of Dorothy, with his dog who he agreed to stop tying up. He is so genuinely happy here after his dog received vaccinations and was neutered.

The weather in Tangier in January is like a spring day in Britain – mainly cool with clear skies but the nights are very cold. A bonus of this time of year is that there are no flies!

I stayed in a little room inside one of the cat houses. The cats were allowed in my room during the day but I had to chase them out at night. To most animal lovers it might seem utterly charming to sleep surrounded by 36 cats and kittens but when you are kept awake at night by kittens having rough and tumble on your throat the charms start to wane! Ha ha, so sadly at night time they had to go. One of my duties was to look after the cats in this cat house. General duties of feeding and cleaning but there was also a spell of respiratory infections going about so I had to administer antibiotics to all the infected cats. A very time-consuming job and I was glad I was able to take the burden of this task from the full-time workers.

Another task was to put the wheels on to the disabled dogs and let them out for a run around. Wow- how fast they can go! In between the busy periods we would spend time just sitting with the animals. I would sunbathe with the dogs or give the friendly donkeys a brush and a chin rub- so cute!

I adored Mattie before I had even heard about her story. She seemed like such a sweet girl who kept to herself and out of mischief. Then I found out she had been rescued from the streets. She had been found living under a truck, looking after a kitten and allowing the kitten to suckle on her! Both Mattie and the kitten were brought in to Le Sanctuaire de la Faune de Tanger where they live happily ever after. This film also shows a little of the countryside where the shelter is situated.

I have worked with rescued animals before where I have felt very sad for them and dearly wished a loving home for them. It was different here at Le Sanctuaire de la Faune de Tanger- this is the animals’ home and they are all very happy and seem to be having a great time.

“This is a genuinely happy place and I hope Sally can spread the message of animal care and love throughout Morocco. Morocco needs a hundred Sallys!”